Following an application process, Nikki Arthur, Sarah Vorster and Lee Worsfold were appointed by the Isle of Man Sport selection panel, joining the returning member Stephen Cregeen who was also re-appointed for another four-year term.

The body, which retires by rotation on a four-year basis, is an independent forum for the promotion and development of sport and recreation, advising and assisting the Isle of Man Government to deliver its strategic objectives in relation to sport.

‘I’m pleased to welcome Nikki, Sarah & Lee as the newest members of Isle of Man Sport committee. The new and returning members have a varied experience in different aspects of sport and will use their specific areas of expertise to ensure that Isle of Man Sport continues to challenge themselves and develop the ways they can assist and support the Island’s sporting community.

Isle of Man Sport continue to be a key part in the delivery of the Isle of Man Government’s key objectives, and helping the Island's athletes, coaches and volunteers in fulfilling and achieving their sporting ambitions.'

Sarah Vorster has represented the Island at netball and has been part of the athletics management team for two island games, Sarah is a former Sports Masseur and Sports Therapist at professional rugby and football club’s in the UK.

Lee Worsfold is a Chartered Accountant, with experience in both the public and private sector. Lee is involved in distance running and is treasurer of a local athletics club.

Isle of Man Sport also thanked three of its outgoing members at the meeting, Karen Riordan, Andy Fox and Jon Whiting. Karen has been part of IOM Sport for 8 years and has overseen the review and development of the Sports Liaison Committee's governance processes. Andy & Jon both joined IOM Sport in 2018; Andy sat on the Sport Aid Committee during his time with IOM Sport, whilst Jon served as part of the Sports Liaison Committee for two years, before transferring his expertise to serve on the IOM Sport Aid committee for the following two years. 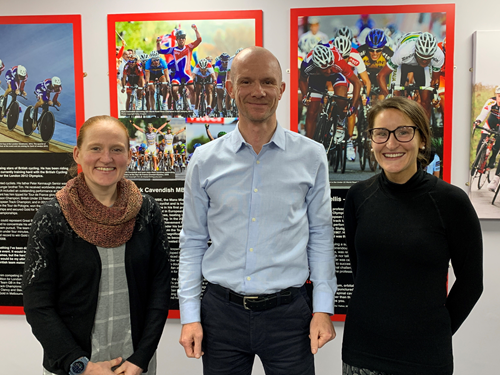